The notebook's case is made entirely of black plastic. There are no surface textures. The top of the base unit and the back of the lid are rubberized. The speaker bar is above the keyboard and is angled towards the user. A power button that cannot be overlooked was placed between the speaker bar and the keyboard. On the underside of the device you will find two easy-to-open maintenance

The case is very solidly made. The device does not show any weaknesses in terms of stability. The hinges keep the lid firmly in place. The lid can be opened with one hand.

The notebook offers a multi-color keyboard. The main keys have a size of about 15 x 15 mm. Overall, the keys have a normal drop and a clear pressure point. We like their crisp resistance. All in all a keyboard with a very good typing feel.

The multi-touch capable touchpad measures 10.6 x 6.1 cm. This leaves plenty of room for using gesture control. The smooth surface of the pad makes gliding quite easy for the fingers. The various gestures can be switched on and off individually in the pad's configuration menu. Two mouse buttons are underneath the pad. They have a short drop and a clear pressure point.

The WLAN module also provides the Bluetooth functionality of the notebook. A Gigabit Ethernet chip from Realtek's RTL8168/8111 family handles wired network connections without a murmur. The built-in webcam generates images in resolutions of up to 1920x1080.

HI-TECH uses only full-copper heatpipe cooling. This type of cooling ensures optimal conditions and makes this unique notebook: While HI-TECH only uses this technology, other manufacturers often obstruct only inferior aluminum / copper hybrid or even pure aluminum coolers. These have a much worse cooling performance. Especially in gaming applications when devices are heavily used, there is a risk that the unit overheats. This leads to the fact that the individual components down contacts for reasons of protection, which minimizes the power of the device enormously. In the worst case, there could be breakdowns and could shorten the life lead. 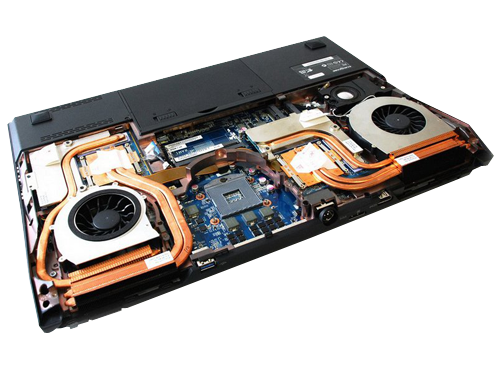 With the HI-TECH-copper heatpipe cooling in contrast the notebook is perfectly chilled even under extreme stress!

Need some examples? Maximum 34.9 ° C on the top and a maximum of 34.5 ° C on the bottom are given the high performance, a very low value. Make long gaming sessions are extremely comfortable, more than 24.5 ° C we could not measure on the palm rest. In idle mode, not even a temperature of 28.4 ° C is exceeded.

One might assume that the low surface temperatures expense of its components. But thought wrong: In our several-hour full load test (Furmark & Prime), the processor and the graphics card was far from critical regions, a maximum of 76 respectively 80 ° C gave the CPUID from Hardware Monitor. In idle mode, the components are shuttled one to nearly 40 ° C.

Mobile INTEL HM670 Express chipset. PCIe (PCI Express) is a data transfer standard. Rule of thumb: The speed roughly doubles from version to version. So PCIe 5.0 is about twice as fast as PCIe 4.0. The "x" is short for "lane", i.e. a single line. "x4" means that there are four lines of the corresponding PCIe version. 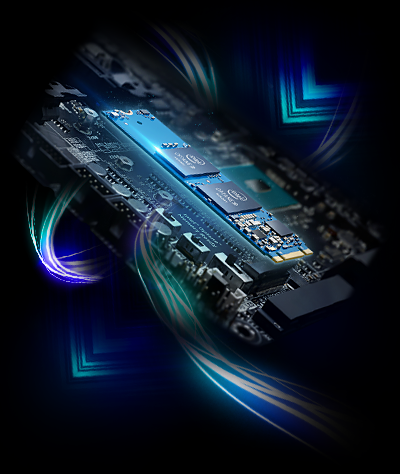 The more lanes a chipset offers, the more devices can be used simultaneously at full transmission speed. A significant advantage of the new Intel CPUs compared to the previous model: They support PCIe 5.0 and above, for example the connection of particularly powerful graphics cards and M.2 SSDs. Average performance is slightly below the old GeForce GTX 1660 Ti Max-Q. However, this can vary significantly depending on the TGP variant. As a result, the GPU is best suited for Full HD with high details. The performance is hardly sufficient for ray tracing effects, but the tensor cores can help to achieve higher performance in some games via DLSS.

The GA107 chip offers 3,072 FP32 ALUs, half of which can also execute INT32 instructions (i.e. 1,536 INT32 ALUs). With Turing, all shaders could still run FP32 or INT32. According to Nvidia, the ray tracing and tensor cores on the chip have also been improved. The Ampere chip also integrates a hardware video encoder (NVENC 5th generation for H.264 and H.265) and decoder (7th generation for numerous formats including AV1). 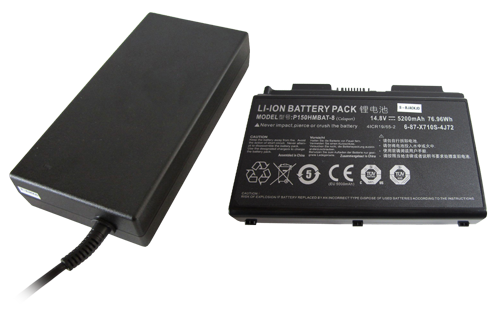 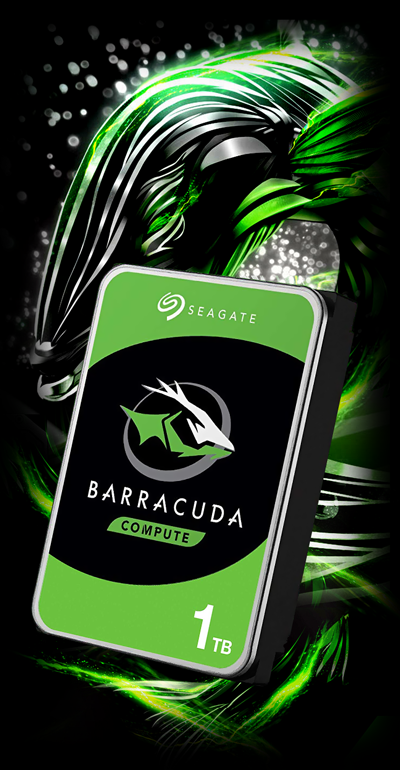 Seagate has a very slim 2.5 "hard drive in its BarraCuda series, which offers a good mix of performance and power. Thanks to the low height of just 7 mm, the hard drive can not only be used in a desktop PC, mini PC or notebook, but it also fits in many ultrabooks, in which for a 2.5 "hard drive with a" normal " "Height of 9.5 mm is not enough space available.

With a rotation speed of 5,400 RPM, the Seagate is not one of the fastest 2.5 "hard drives on the market, but it provides sufficient power to be used as a convenient data storage in addition to an SSD, which is used as a system drive. Thanks to the low speed, the hard disk also works very quietly and saves energy.